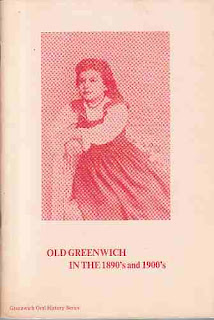 The Greenwich Library Oral History Project, with its collection of more than 950 interviews and 138 books, staffed and run by volunteers, has been in existence since 1973. Before interviewing likely narrators, the volunteers sought and received training on the many skills required to run a successful oral history project. Over the years, the project has added to the town’s historical record by interviewing residents who have either made Greenwich what it is today or who have been witnesses to its history. Some of their recollections take us back to as early as the 1890s.

As a way of paying tribute to our earliest narrators, we have dug into our archives, and over the next few months, we will dust off their stories and retell them here. We have the recollections of founders, movers and shakers, and selfless volunteers. Our narrators tell stories of disaster, natural and manmade; of times when estate owners hosted annual, eagerly-awaited picnics on their grounds; when superintendents of estates were powerful keepers of gardens, livestock, and their employers’ vast real estate holdings. We have recollections of the town’s topography before there were paved roads, when horses and carriages were the taxis and limos of the day.

The project’s earliest recorded interview is with Mary Dodge Ficker, who describes growing up in Old Greenwich in the 1890s and then into the 1900s.

Mary Dodge Ficker (born in Stamford, Connecticut, 1885; died in Old Greenwich, 1984) was interviewed at her home by interviewer Marian Phillips in 1975. Ms. Ficker describes moving to Old Greenwich as a child when there was no central town to speak of, when shopping required making a trip to Stamford. “You couldn’t buy a spool of thread” anywhere else, she recalls. She describes a sleepy town of modest homes, of summer people who rented houses while the owners took up residence in shacks out back. The summer people provided some interest, but church was the center of the town’s social life.

Ms. Ficker has a wonderful passage about a rift in the Congregational Church on Forest Avenue, which led ultimately to a split in 1894. The minister at the time left with a number of parishioners to form what would eventually become the Presbyterian Church. Fortunately, The Dodges were very fond of the new minister and neighbor, DeWitt Eggleston, and his family. They remained friends for the sixteen years of the minister’s tenure at the church.

Ms. Ficker goes on to describe the continuing growth of Old Greenwich from a small community, to a popular summer destination, to a thriving small town with its share of wealthy year-round residents. Along the way, she reminisces about large backyard gardens that kept the residents in seasonal produce, some of which was stored away in root cellars for winter. It was not unusual for families to keep cows for milk on the property, she shares, until this practice gave way to milk delivery wagons and ice boxes.

Another interesting story she tells is of “Father Bigelow,” (Edward F. Bigelow, the first curator of the Bruce Museum’s natural history collection) who, according to Ms. Ficker, brought the study of nature to Old Greenwich. Ms. Ficker first knew of Bigelow from her school days in Stamford, where teachers released their students to go on walks with him to study various plants and flowers. Ms. Ficker attributes her own awareness of certain flowers to him. One in particular, Dutchman’s breeches, she grew in her own garden. He and his daughter ran a summer camp in Old Greenwich, which apparently became quite popular among the New York social set, and at some point, Wallis Simpson (of Prince of Wales fame) brought her children there.

Ms. Ficker recollects other times, as well. She remembers a town before many services were available. There were no police officers, but there were sheriffs who “always were Palmers,” she notes. She remembers that swimming on the Tod property was by invitation. Without that, a swampy Binney Park stream would do. She remembers the hardships brought by World War I when coal was scarce. 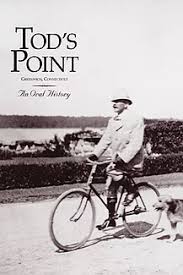 She comments that her family always had its ups and downs. Her quote about those days is a fitting salute to her, the narrator of our first interview:

Mary Dodge Ficker’s interview, “Old Greenwich in the 1890s and 1900s,” is available in the library’s first floor reference area and through the Oral History Project office, located on the lower level of the library.

Posted by oral history admin at 3:11 PM No comments: