At this time of year it is fitting that we honor Clementine Lockwood Peterson, born June 3, 1903. Her extraordinary legacy to the Greenwich Library is well worth remembering. The blog post reprinted below and taken from the Greenwich Library Oral Project’s book The Lady in the Portrait was first published September 24, 2013. The book, comprised of eleven interviews, tells the story of this remarkable woman whose multi-million dollar bequest to the library remains unparalleled. 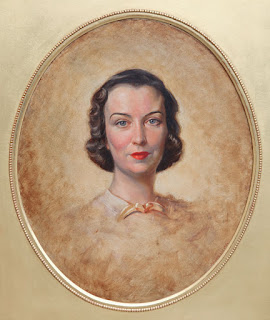 There are three portraits hanging in the Greenwich Library, two on the wall to the left of the main entrance and the third in the listening area of the music room on the second floor. Regular visitors will no doubt pass these portraits many times, perhaps glancing at them hurriedly, momentarily wondering why these almost “homey” images are on display in their town library. The two on the first floor are of Mr. and Mrs. J. Whitney Peterson, and the third is of their son, Jonathan. Their family story in many ways reads like a fairy tale of good fortune and graceful living, but it is also a tale of great sorrow. Ultimately though, it is a story of love and generosity. And the lady in the portrait on the first floor of the library, Clementine Lockwood Peterson, is the subject of the Oral History Project’s latest book fittingly entitled, The Lady in the Portrait. Clementine Lockwood Peterson. 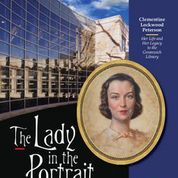 Recently, the Oral History Project hosted a reception to launch the book about Mrs. Peterson’s, her life and her legacy to the Greenwich Library. The reception was not only in recognition of this accomplished and generous woman, but was also to honor those narrators who gave of their time to make this book a reality.

Born June 3, 1903 in Greenwich, Clementine Lockwood Peterson spent her early life in Ridgefield, Connecticut. She attended prominent schools in the East before graduating from Bennett Junior College, a finishing school, in Millbrook, New York. Then, in 1925, she
married tobacco heir, J. Whitney Peterson, later settling into the Zaccheus Mead Estate in Greenwich where they lived for many years. Mr. Peterson later became president of the United States Tobacco Company. The couple had only one child, Jonathan, of the portrait on the second floor, who was known as Jay.

Mrs. Peterson, who in many ways led a charmed life, came to know tragedy and heartbreak. Jay died in an automobile accident in 1957 at the age of twenty-three and then, just two years later, her husband died. In 1992, after her death on the eleventh of April of that year, to honor her husband and son, Clementine Lockwood Peterson, through her attorneys, left a bequest of $25 million to the Greenwich Library. Her wish was for the funds to be distributed by trustees through a foundation established in her will. The Clementine Lockwood Peterson Foundation was created primarily to benefit two main areas in the library, business and music, in honor of her husband who had led one of the nation’s largest companies and in honor of their son whose great passion had been music.

The bequest remains the largest ever made to a local library in the United States.

After much deliberation and with deep commitment to honor the terms of the bequest, the Peterson Wing, which added 32,000 square feet to the library and would house, among other subjects, the library’s business and music collections, officially opened its doors on June 12, 1999.

Although she had been born in Greenwich and had spent many years in town, Mrs. Peterson was not a well-known presence at the library. In fact, when news of the bequest was announced, few among the library trustees knew who she was. Many of the narrators in the interviews that make up the book who did know her comment on her penchant for privacy, but she was at the same time an active member of the community. In fact, what emerges from the interviews is a woman with many sides. At various times during her years in Greenwich, she was an active volunteer in local organizations. She was an avid dog breeder and owner of show dogs, literally having written the book on Keeshonds, her favorite breed. In addition to writing, she was a skilled sculptor of animals, primarily of birds and dogs.

In her personal life, she was the formal Mrs. Peterson, the informal Mrs. Pete, and the familiar Auntie Clem. There is the proper, businesslike mistress of a large estate and the fun-loving hostess with a playful sense of humor. But most poignantly perhaps, there is the observant and caring benefactor who sees need and intervenes to provide help.

But the light must have gone out of the life of this accomplished and generous woman when she lost in quick succession her son and her husband. A year after her husband’s death, she sold the estate. She then lived for many years in a house on Taconic Road. Finally, she moved to a retirement home, Crosslands, in Kennett Square, Pennsylvania where she died in 1992, but not before she meticulously set up one last act of incredible generosity. And the town of Greenwich will forever be the beneficiary of her largess.

The Lady in the Portrait is available through the Oral History Project office and can be purchased for $18. Call the project office at 203.622.7945 for further information. The book is also part of the library’s circulating collection.


Posted by oral history admin at 12:55 PM No comments: