The Spragues of Steamboat Road

With this interview, by Oral History Project volunteer, Joseph Campbell, we reach once again into our archives for a narrative taking us back to the early 1900s. In 1976, Betsy Cullen interviewed William and Francis Sprague, who shared what it was like living in Greenwich at the turn of the century.

A married couple, born within a year of each other, who years later died within months of each other*, the Spragues tell of growing up and living in Greenwich and of residing on Steamboat Road.

This is their story:

Many times when we read the histories of former residents of Greenwich, their memories are of happy times growing up simply or during major events, such as World War II. The focus is usually on the positive. 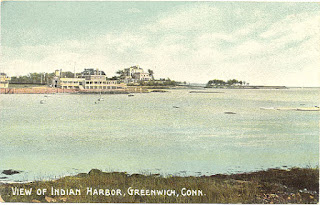 William and Francis Sprague grew up in Greenwich in the early 1900s, before and after the First World War. Their reflections include hardships endured as well as good times enjoyed.

For the Spragues, growing up near or on the water on Steamboat Road (Mrs. Sprague lived there as a child; the couple moved back when they married), some of the good times included swimming in the bathing suits “God gave them.” They also recalled how Standard Oil had large oil holding tanks along the waterfront and how when they fished, they would have to move on to Greenwich Cove where there was less trash in the water and where the fishing was better.

They tell of the winter of 1917 when the salt water froze up to 20 inches thick and prevented the barges from bringing in coal. Horses and sleds were used to go across the ice to get the coal in. They recount how they fished for eel by chopping holes in the thick ice and then using a long spear to stab them. We are told of the times when they had to burn wood before they had coal, and this was long before they had electricity in their homes. 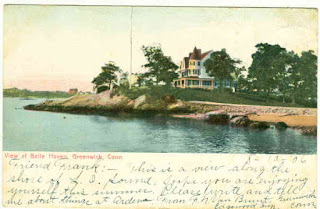 Sometimes the snow was so deep they had to dig their way out of the house to go for food, doing the best they could. There were no indoor toilets, and once they did get running water, the pipes froze all the time. In the morning they had to crawl under the house and warm up the pipes with boiling water to get it flowing again.

Francis recalls working at the old Greenwich Hospital on Milbank Street. She worked in the kitchen with her sister when Francis was 12 years old. She worked 13-hour days.

Lest we begin to think that theirs was a life of constant toil, there were fun times as well. You can read the descriptions of winter sleigh rides and summer carriage rides in beautiful English style horse-drawn carriages. 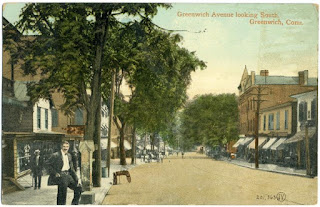 The wondrous thing about these stories is the details that transport the reader to another time. The Spragues seem to remember everyone they knew when they were growing up, from the people who delivered the ice in the summer, to the shoemaker and pizza maker and the bakers. They reminisce about the streets and the buildings no longer there. In the fall there was Mr. Mead’s apple orchard, with apples ripe and so enticing, kids just had to pick the tempting fruit. They remember the old post office and before, when it was a hole in the ground filled with water that froze over in the winter, allowing the kids to ice skate. The Spragues describe a time when Greenwich Avenue had no lights and no cars, just horses pulling a trolley up and down with a water trough at the end.

The Spragues interview is a long one, well worth the reading. Their knowledge of old Greenwich and the people who lived and worked and played here is staggering. It contains much detail on life in old Greenwich. Life was hard and much was expected of kids who were many times forced by circumstances to grow up quickly and to take on adult responsibilities. But these hard times were also punctuated with good ones.

For an amazingly detailed remembrance of the Greenwich that used to be, I would encourage you to come to the library and read the Spragues story. It may inspire you to drive around to see where the old bakery with the warm rolls in winter was located or even to find the old Spragues house. And therein lies the value of the Oral History Project’s vast collection, memories that intrigue us and stir the imagination. 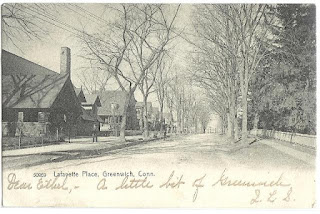 Posted by oral history admin at 4:29 PM No comments: